The Mission and the Message

I have had the privilege of traveling to several educational conferences the past 3 weeks.  I am working through several observations rattling around in my brain so I figured it was time to start blogging again.

In listening to educators in a variety of settings this summer, I continue to be surprised by the anger I encounter.  Anger particularly aimed at 1:1 technology programs, but occasionally aimed at other initiatives such as curriculum review and evaluation systems.  Admittedly, I am not strong on the feelings… but the intensity of the emotional reaction of some surprised me.  These were educators of all age levels, public – private schools, K-20… I tried to move past the “WTH response” and really listen.  What I heard….

Anger happens when Mission is lost in the Message…

I was in a session on, of all things, Ignatian Burnout (when one of your foundational prayers reads “to fight and not to head the wounds… to toil and not to seek for rest”– burnout takes on a whole new level) when the conversation once again turned to technology in the classroom.  A teacher passionately argued that students were being harmed by technology.  Others jumped in (including me) and the emotions started to run a little high… the teacher arguing harm left the room, clearly frustrated.  I caught up with him later in the conference (because I am a 9 on the Enneagram and must peace-make).  Turns out, it’s not technology that is the problem.   I finally heard his real concern – that by relying so heavily on messaging the school’s 1:1 program the foundational message of Ignatian Mission was (in his opinion) being silenced.

This is a real issue.  How we talk about our schools can act to define the reality of the school.  Communication scholars refer to this as socially constructed reality through communication.  As I have written before, ultimately the symbolic meanings placed on spaces, texts or mission is in the mind of those receiving the message.  Beauty is in the eye of the beholder and all that …

In cases where mission and identity is seemingly overshadowed by contradictory messages, feelings of hurt, anger and confusion can arise.  In the story above, as the only words being offered to socially construct the meaning of “school” were technology, 1:1, iPads… the teacher felt the entire focus of the school was shifting from the 450 year old tradition of Ignatian education.  The teacher felt threatened which led to a feeling of isolation which led to anger and eventually a relationship out of balance.

Being in “right relationship” is charism applicable to all settings.  In schools, we often hear of failures of relationship – particularly between faculty and administration (transparency anyone?).  Related to mission and the message, this is a two-fold issue.  One is an issue of leadership.  A significant danger of leadership is losing site of the message.  Who we are as articulated by mission and core values is critical.  When this message is diluted by a series of initiative jargon (IB, 1:1, STEM, PBL, Inquiry Learning, Merit Pay) we run the danger of creating harm in our learning communities.  The second is an issue of listening with good will.  When we stop active listening to each other (which includes questioning) then words become weapons.   I was surprised when the teacher told me I was the first administrator to “really listen” to his concerns.  Mind you, we had a 15 minute conversation during a coffee break – hardly an in-depth heart-to-heart.  At the same time, the teacher admitted this was the first instance of him really listening to an administrator.   Listening with good will is a powerful experience.

There are a many initiatives in our schools, large and small.  Forward movement requires a certain level of restlessness… and there is nothing bad about a little imbalance.  However, we must keep in mind our mission as we craft our message.  Words can hurt.  Words can also define, excite and motivate.  Remember the mission – the core values of your school – and frame growth in terms of that mission.   How we talk about our schools constructs the reality of the day to day experience – and our schools are only stronger with strong foundations. 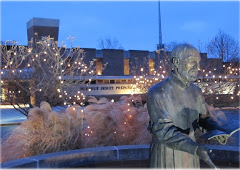